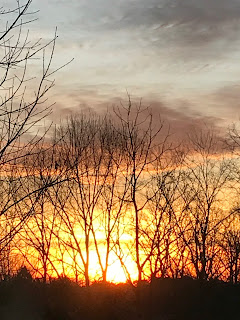 The theme of my meditation this morning was candor/honesty. While pondering candor and honesty I wondered if people really want to know the truth when they consult with a doctor. Maybe they just want to be placated and given a magic pill that will allow them to avoid taking responsibility for their health. Or to be told that everything will be alright even when that is far from the truth.

I chose this breaking dawn photo today because I want it to 'dawn on' my readers as it dawned on me that our current system of healthcare is beyond broken. How healthy is it for medical students to be taught that their job as doctors is to 'diagnose' a disease so they can 'treat' it with a drug?

I recently saw a patient in consultation who had seen a few doctors before he came to me (a common occurrence). One of them was a Rheumatologist (specializing in autoimmune disorders) because in his initial lab work he had a positive ANA. When I saw him he had many seemingly disconnected symptoms but I could see a pattern evolving and thought he needed further testing and treatment.

He wanted to wait until he had had followup appointments with the other doctors he had seen and by the time he was seen in followup many of his initial symptoms were better. When he saw the Rheumatologist that doctor concluded that the positive ANA must be a false positive.

This would mean that the lab test shows an antibody to his own tissue but that the result is an erroneous result due to lab error. The doctor concluded this solely based on the fact that the symptoms were subsiding as if it were impossible for symptoms to wax and wane. This conclusion was probably also because now the patient doesn't meet diagnostic criteria that would allow him to prescribe a drug!

Being candid with my readers I have to ask - do we honestly think a chronic disease like lupus (diagnosed with positive ANA and other autoantibodies) or diabetes (diagnosed by having an average blood sugar over an arbitrary amount) just pops up in your body one day for no reason?

The answer is NO - these processes take time to develop in the body. I have multiple patients with autoantibodies either ANA or thyroid antibodies that don't yet have symptoms. If your immune system is running amok due to some process that might be able to be controlled or reversed with lifestyle changes shouldn't that be the first line of investigation and treatment?

Unfortunately for most people, they aren't provided with the opportunity to reverse their diseases because most doctors aren't trained to detect early signs and symptoms of future diseases. Functional medicine doctors are trained in sleuthing for early signs and helping patients reverse those by changing their diets and improving their nutrition. (As I explained to my son yesterday when he was making poor dietary choices - all medicine was originally functional/nutrition/herbal based until pharma came along and decided to make selling legal drugs a big business.)

I think the most exciting area where early detection can make a huge impact is in the area of Alzheimer's disease. As many of you are aware my mother passed away four years ago this month due to end complications of Alzheimer's disease. When I first took her to see a doctor for her memory issues she was 61 years old. He said she 'didn't meet criteria' for diagnosis of Alzheimer's so he didn't prescribe any of the drugs in use at the time (Aricept, Namenda). He also didn't offer any suggested treatments.

Now there are thousands of patients who are being treated with a pre-emptive protocol from Dr. Dale Bredesen (an Alzheimer's researcher) who authored The End of Alzheimer's in 2018. By searching for possible metabolic 'switches' that can be turned off or on and making sure they are being optimized to promote neuronal growth, regeneration and repair we can assist patients in improving their cognition (ability to think clearly and form memories). There are also environmental toxins that can harm neurons and break their ability to connect properly and those must be identified and dealt with.

Another very exciting area is cancer research. I am finishing a book right now by a research doctor who I blogged about in March. She has discovered a connection between a retrovirus, chronic fatigue and cancer. Explaining the research would require rewriting the book but it is enlightening to see outlined in her book the difference between research doctors who want to answer the big questions and those who are just posturing for credit and glory.

The bottom line is that one of your immune system's jobs is to identify new born cancer cells (that form in your body on a daily basis) and squash them like a bug (actually I think they chew them up and don't spit them out).

So wouldn't it be a good idea to have regular 'pre-emptive' checkups? Peek under the hood and see what's cooking? Or maybe we really don't want to know the truth?

Personally I want to look for any early signals and head off any developing issues before they get out of control. If this describes you then find a certified Functional Medicine doctor near you on this website. Ask them a lot of questions before you go as some FM doctors specialize (in cancer or autism or Lyme or autoimmune issues) and make sure they are a good fit for you.

I'm sad I had to cut my trip to Louisiana short this past week - I wanted to meet with some of my readers to have a Q&A. I hope to set one up online in the near future and will keep you posted once it is all arranged. If you have a question please send an email to karenfmillermd@gmail.com. You may not get an answer the same day (work taking precedent sometimes) but I will answer.

Posted by KFMillerMD at 8:04 AM